Child and Adolescence: Effects of Divorce

‘Signs and symptoms. DeBord (2009) and Tempke (2009) both attempt to highlight appropriate risk factors and common interventions parents can utilize with their children. 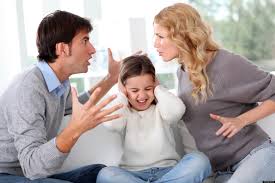 Parents may think that their infant will not be affected by divorce. Unfortunately, infants often react to parental stress showing signs of increased mood and decreased appetite. Some researchers hypothesize that both infants and toddlers will have long term effects of the divorce that will not be evident until their later years, including abandonment issues and emotional attachment issues (Butler, Douglas, Murch, Robinson, & Scanlan, 2003). Toddlers also sense conflict and change. Temke (2009) reported that many toddlers believe they have caused their parents' divorce. Toddlers can express emotional symptoms of depression, anger, moodiness and aggression (Temke, 2009). DeBord (2009) goes on to state that many toddlers understand that a parent has moved away but does not understand why. This is where parent communication is very important; being honest with the child, explaining the separation or divorce in an age-appropriate fashion. Parents need to stick to routines, spend time with the child, and welcome other family members to provide care and assurance (DeBord, 2009). School aged children are better able to understand grown up problems. More than likely they have a friend or someone they know who has experienced divorce (Debord, 2009). Often times this age group is in emotional pain over their parent's separation. Some may be still too young to understand how to control these emotions. They may experience social embarrassment, anger, divided loyalty issues, false hope that their parents will reconcile, and somatic symptoms (Temke, 2009). Parents can support their child in keeping lines of communication open, seek professional help if signs of depression become apparent, plan special time together, keep daily routines, and encourage expressions of all emotions (DeBord, 2009). Teenagers also face many emotional symptoms ranging from anger, fear, and loneliness to depression and guilt. Many teens have a hard time accepting the divorce. Knowing the physiological changes occurring during adolescence, including increase levels of testosterone or estrogen, it is no wonder than this age group can be critically affected by major life changes. DeBord (2009) reports teenagers feeling disillusioned, abandoned, highly stressed, which may lead to high-risk behaviors including skipping school, drugs, alcohol, and shoplifting. The teenager also can take on adult like roles, feeling like they need to help with finances and help to take care of younger siblings. Others worry that they will never be able to trust marriage themselves, and may choose to cut one or both parents out of their lives due to anger and the fear of the unknown (Temke, 2009). Parents' can help their teenager feel more in control by talking to them about the divorce, maintaining rules of the household and reminding the child that they had nothing to do with the divorce and assure them that they are just as loved as they were before the separation (Temke, 2009). It is important for parents to remember not to use their divorce and its effects on the teenager as a replacement partner, keeping in mind that even though the child is older, he or she is in no position to be told personal information regarding the details of the divorce or feel put in the middle (DeBord, 2009).'

This is important information to keep the lines of communication and maintain the best for your family. We hope this was helpful.

Next Fighting in front of the children?
Previous PARENT ALIENATION IS NOT JUST VERBAL