PARENT ALIENATION IS NOT JUST VERBAL

Parent Alienation is not just bad mouthing the other parent. Alienation comes in the form of behavior not just verbal. 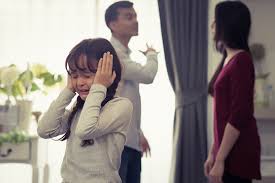 Can you see the difference that each behavior exhibits and illustrates for the child?
When parents fail to acknowledge the other parent in the presence of the child, the child feels this dismissal and divide between the two people they love and need to trust most in the world.   The child now begins to see the parent who has been dismissed as either the victim or the enemy. In parental scenarios with the children present it is important to show for the children that parents are not enemies to each other. Yes, there has been a separation and divorce among the parents but the child should not feel they have to take sides, but most likely will, it’s only natural. It’s unfair and psychologically damaging for a child who has nothing to do with the failure of the marriage to be caught in the middle of an adult situation. If you feel there has been alienation on either side, The Mediation and Family Counseling Group/Cooperative Counseling offers Parent Coordination and psycho-education to improve and minimize stress or tension among what is still FAMILY.